“It matters not what rank [the reporter] has, what revenues or garnitures. The requisite thing is that he have a tongue which others will listen to; this and nothing more is requisite.” – Thomas Carlyle 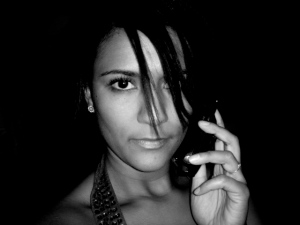 Playing a Game of Telephone with the Whole Internet

Tomorrow, I leave for the mega-conference called South by Southwest, a multi-track event with a focus on interactive media, music and film. I’ve wanted to attend SXSW since 2007, but am just now in a position professionally and financially where it makes sense. I’m paying my own way, as my focus and goals while there are geared towards making the best connections and absorbing the most knowledge I can for my future endeavors on Mouth of The Border.

I frequently share live updates from public events I attend, whether it be a food- or cocktail-focused event, tech or social media gathering or one of my company’s conferences. I don’t do it just because it’s fun. I do it because it might be interesting or useful to someone, and also because sharing live “on the scene” it what I was trained to do. END_OF_DOCUMENT_TOKEN_TO_BE_REPLACED

Three Years of Twitter. What a long, tweeted trip it’s been.

Sunday, March 7 marked the three year anniversary of the day I joined Twitter. 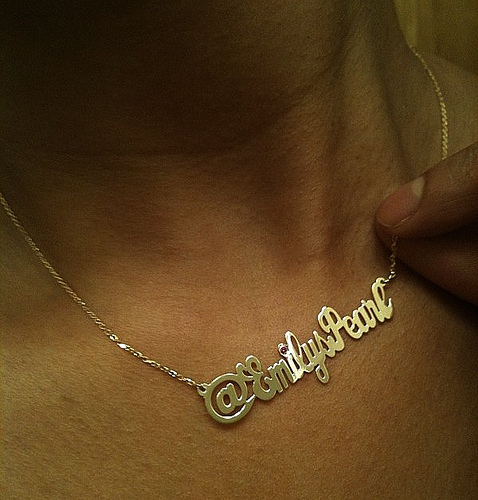 My original Twitter username in 14K gold and rubies from @TheHippest

I don’t remember how I first heard about the platform. I didn’t use it much for the first 8 months and after a year and a half, I still mainly shared with a small circle of people … maybe 300 people followed me and I followed half of them back.

Sometime over the summer of ’08, I became friends with Jack Dorsey, cofounder and the idea guy behind Twitter. On one of his visits to NYC in October, I went to my first Tweetup (being hosted by a friend of his) and experienced the power of the hashtag. 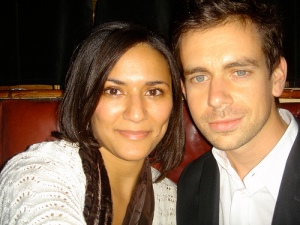 By following the hashtag before the get together, I connected with Brian Simpson (@Bsimi), fellow Sox fan and New England transplant. It was right before he joined the staff at The Roger Smith Hotel (@rshotel). END_OF_DOCUMENT_TOKEN_TO_BE_REPLACED 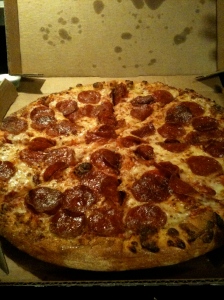 A few weeks back I read this article in USA TODAY about how Domino’s was actively implementing social media to promote their new pizza formula. This line caught my attention: “Domino’s will reach out to food bloggers and others who have criticized the brand in the past and ask them to comment live on the Domino’s website about the new formula.”

I tweeted a link to the article because several of my connections on Twitter are involved in studying the uses of social media for marketing and advertising. The people who run the Domino’s account on Twitter saw my mention of them and asked me to follow them, so I did as I was curious to see how they were using Twitter. They also were kind enough to send me a coupon for a free pizza so I could try the new pizza myself. END_OF_DOCUMENT_TOKEN_TO_BE_REPLACED

Have you ever been rewarded by a company (brand, entertainer, etc.) for being a fan of their product or service? That happened to me today.

A hotel I love sent me an oversized, comfy zebra print bathrobe – the kind you always want to steal but even better – just because I follow them on Twitter and engaged with them. 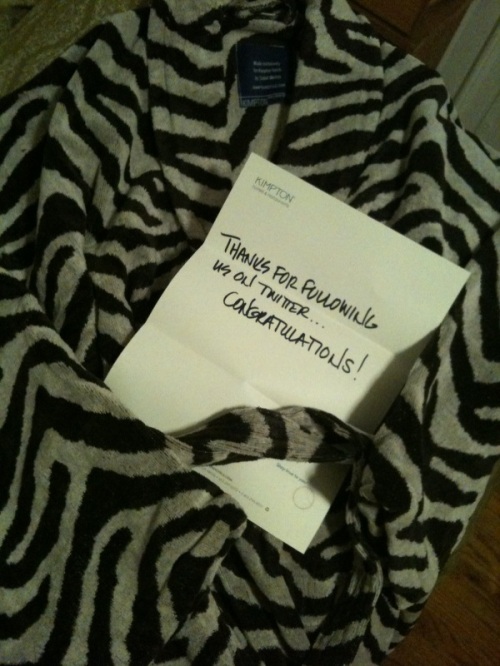 Note says "Thanks for following us on Twitter. Congratulations!"

In June 2009, I traveled to California for the first time. After a weekend in San Diego, I headed to San Francisco a day early for my business trip just to hang out and explore the city. END_OF_DOCUMENT_TOKEN_TO_BE_REPLACED

Twitter: Birds of a Feather Helping One Chick Take Off … Literally

I’m a passionate user of the social networking site, Twitter. I’ve been sharing short, personal updates on my life, AKA “tweeting” at @EmilysPearl since March 7, 2007 and on a separate account for work (@ECava) since September 2008.

People frequently ask me why I use Twitter. Because the site limits updates to 140 characters or less, people seem to enter the discussion with the viewpoint that they could get the same mileage out of scanning friends’ Facebook status updates, reading their blogs or shooting them a text message.

I have one recent story that illustrates both the beauty and utility of Twitter in my own life.