I’m taking a mentor’s advice and giving myself a D on life.

Last Friday, he told me a story about a teacher who, on the first day of class, told the students that he was giving them all an A. All they had to do was to write a paper on how they would work to earn the A that semester. By doing so, he believed the students would be freed of worrying about the grade and focus on the actual learning.

But my mentor rebutted that and said I should give myself a D. “A D never killed anybody,” he said. “Expect that people are going to laugh at you. Expect that you’re going to fail. And, once you give yourself a D, you can create your art.” 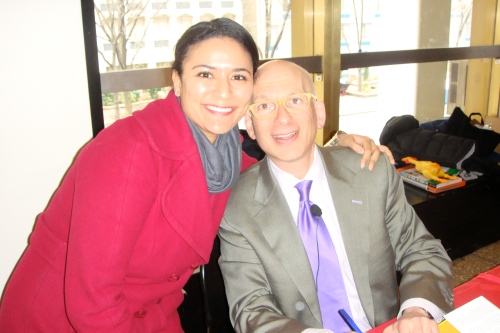 The mentor was Seth Godin. Seth is one of few people to whom I believe the term “guru” applies. He’s been educating me about marketing, branding and the business of being engaged since I found his blog in 2007, when I started working on overseeing my company’s events for senior marketing executives. He’s written some of the most well-regarded books on marketing, and I have come to enjoy his voice as a daily part of my life.

He shared the above story during the launch of his new book, Linchpin. I haven’t read the book yet. I bought it on Friday when I went to hear him speak. In hearing him sharing the story of why he created this book, I knew that the message would be something many of you would find value in.

Below are the five main concepts I walked away thinking about.

"Linchpin: Are You Indispensable?" by Seth Godin

He welcomed us by telling us that the people in the room (between 800 and 1,000 people) were probably the people who least need to read the book. So his hope was that we’d take what we learned, put it in our own words and share it with 10 people. What a great message. This goes back to what I wrote last week in The Narrative, in that he asked me to make him a part of my story. (Please leave a comment here if you read and enjoy this. That way, we’ll know whether or not 10 people were impacted through what Seth shared.)

Seth said Henry Ford is the man of the century. T-Models were painted black not because black was a favorite color, but because black paint dries the fastest. Multiply that by assembly line proportions, and you can easily see the genius in that black paint.

Near the end of his talk, Seth asked everyone who was a genius to stand up. Every one of us did. He said, “I’m glad you did that. If you didn’t stand up, that would have been really awkward.” Sometimes, you just need to hear something from someone you admire to believe and embrace it. Yeah, YOU. You’re a genius. Own it and create like you believe it.

Industrial Age < The Age of Art

Seth shared a couple of hilarious photo slideshows with us. One was from “one of the world’s largest collections of photos of lunchladies.” He talked a bit more about assembly lines, how our school system was created to make everyone blend in instead of stand out, and then about the ever-maligned lunchlady. In his view, we’re quickly moving out of a time in our country’s culture when you do your time in school, work for Firm XYZ, punch a clock for 45 years and turn in your keys at the end for the cheap gold watch.

The dot.com boom and bust followed by the market implosion in late 2008 led several people to question their lives and careers and their place in the whole scheme of things. Many of those people reached out to Seth in letters and emails, and their outreach had an overall tone of “This isn’t how it was supposed to happen. I worked so hard, and for what?”

These emotional frequencies are what vibrated with Seth and are in large part what led him to write Linchpin. The subtitle of the book is “Are You Indispensable?” He wants people to feel as though they’re needed. We are moving away from punching a timeclock and towards working around the clock because we’re creating something of value.

Seth gave a shout-out to Elizabeth Gilbert’s wonderful 2009 TED Talk on Nurturing Creativity. I suggest you either watch the video or read the transcript to hear from someone who is creating this Age of Art.

“The most generous person wins.”

The poster Seth gave all attendees at his book launch. Generosity in action.

This was my single favorite takeaway. My friends and family and boss all give of themselves constantly and it really makes me look at them differently. My boss in particular is always that person who will go to the ends of the earth to make sure our clients feel as though they are the only client we have.

Seth’s example of lethal generosity comes from a London coffee shop, Prufrock Coffee. The owner gives out a Dis-Loyalty Card to customers, encouraging them to get stamps at eight other local coffee shops. If his customer visits all eight competitors and comes back, he gives them the gift of a free coffee. This is brilliant for a few reasons.

1) Prufrock Coffee is losing money every time a buyer chooses competitive coffee over theirs. But they must be generating at least some good will in the process, as he’s putting some of the businesses in his niche on the radar for other people.

2) He is rewarding loyal clients. To have them drink at eight other places and STILL come back for his coffee shows that they are engaged and that they LOVE coffee.

3) How incredibly confident must the folks at Prufrock be for them to shove their clients into the arms of the enemy and know that they’ll be back? You have to admit, that’s both ballsy and awesome.

This concept of “lethal generosity” has been coming up for me quite a bit since I first came across it in Shel Israel’s book Twitterville. You can read about his definition of it here. I will be revisiting that topic here soon.

There were many other points I wish you could have been there to hear and experience with me. I hope you’ll check out reviews from people who have actually read Linchpin, or go ahead and buy it yourself. If nothing else, you should subscribe to Seth’s Blog, as he embodies generosity by giving away free content every single day.

There’s one last point I want to share, and this is the most important one.

Just do the work. If you write, sit down (as I am now at 3 a.m.) and write. If you’re a plumber, get down on your knees and plumb the ___ out of something. Don’t let anything stop you. Go for the D, fall on your face a few times and do the work.

Thank you to Jon Thomas of Presentation Advisors. Jon gave away three tickets to join him and his wife at the book launch, so I couldn’t have had this amazing experience without him.

Thank you to Clay Hebert of Daily Sense. Clay spent six months working with and learning from Seth in 2009 and personally introduced me to Seth after his talk.

I learned one of Seth’s favorite ethnic restaurants is the awesome SriPraPhai in Queens. The conversation lasted all of a minute, but I will never forget that. Thank you both.

EDIT: The book is now for sale. You can buy on Amazon here, Barnes & Noble here or support your local bookstore and ask them to order it for you and other interested folks.